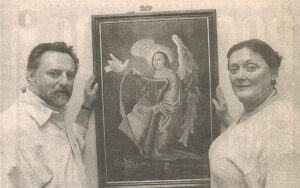 Top American entertainment personalities have clamoured to purchase works produced by Maureen who is cur­rently fascinated and preoccu­pied with all things Roscommon. Her patrons include the ex-President of Ireland, Mary Robinson. Most forceful in her current work is the recurrent cross-reference of Maureen’s experienc­es with Roscom­mon and its themes — from which she draws deep artistic in­spiration.

Deeply struck by the Sa­cred Heart Church, in Ros­common, Mau­reen is now a member of the Church of St. John Eudes — so associated with the Sacred Heart — also the fact that are antecedents’ are buried in close proximity to O’Carolan at Kilronan Ceme­tery continue to fuel her aesthetic development. It is due to these links — which Maureen considers as pre-ordained — that makes her work and the Keadue exhibition so personally significant and meaningful.

Indeed, a beautiful painting of Turlough O’Carolan — based on the recognisable portrait of him — has been given that dis­tinctive Maureen Gaffney-Wolf- son treatment. In a glorious ad­aptation of well-known portrait, her symbolism depicts him as re­vered apostle of music, along with her own self-styled icons re­lating to O’Carolan representing the women in his life, in the form of lilies, adorn the picture. In a heartfelt gesture, this captivating effigy will be donated in aid of the O’Carolan Museum fund.

Other paintings on display at the O’Carolan Harp and Tradi­tional Music Festival will in­clude that of the late Keadue woman ‘Baby’ Walsh, who along with Nan Leyden — a relative of Castlecoote-based politician Terry Leyden — helped her find the ancestral Gaffney homestead at Crosshill, Keadue.

Having first visited Ireland in 1983, Maureen, accompanied by her Californian husband, Steve, came to Co. Roscommon five years ago. Since then, Ms. Gaff­ney Wolfson’s love of the ‘auld sod’ has deepened and with an apartment in the county town they intend to spend much more time in the West of Ireland.

Referring to her most con­suming of passions, Maureen confessed they are “Irish land­scapes and horses: I can’t do enough painting of Ireland — that is where I’m going to stay for a while.” Indeed, along with her numerous illustrations of Ire­land, interestingly, Maureen’s fascination with horses has led to her paint Roscommon Race­course and she also intends to de­vote more time to this equine object d’art. 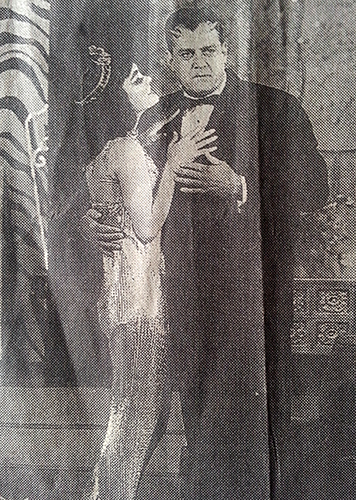 When an aspiring entertain­er, working as a model, singer and dancer, Maureen’s big break came when she became a cast member of the ‘Red Skelton Show’. After this Maureen was a regular on other major T.V. shows such as ‘Perry Mason’ with Raymond Burr, the ‘Danny Kaye Show’ and ‘The Tonight Show’. From there she graduat­ed towards the movies appearing in ‘A Swinging Summer’ with Racquel Welch and ‘Harlow’ with Carol Lynley.

However, Maureen’s trail to her Roscommon homeland was a bizarre one. When holidaying in Galway, her gregarious hus­band Steve struck up a conver­sation in a hotel lift with another guest about his wife’s Keadue links. Mysteriously, this un­known man, advised them to contact Monsignor Charles Travers or Terry Leyden for more information. From there the pilgrimage of ancestral rec­lamation began in earnest with Maureen delving into her Irish roots beginning with a trip to north Roscommon.

In the company of Mr. and Mrs. Leyden, ‘Baby’ Walsh and Nan Leyden, the ramshackled old Gaffney homestead was dis­covered. Anecdotes about the Gaffney clan were retold to Mau­reen, such as those concerning a fore-father, Bartley, who careful­ly washed his face in a nearby stream with one finger. Like an angelic Gaelic vision, the pieces of her familial heritage were being pieced together. Vestiges of the house, such as a horse-shoe nailed over a doorway, pieces of pottery and cooking vessels were all brought by Maureen to her U.S. home as treasured reminders of her genealogical home.

Asked about her artistic at-tempts to reach further into the Irish psyche and whether her pictures come from a purely Hibernian or American-Irish perspective, she quickly replied: “I’m trying to do both.” Stating that she is curious to see if Irish people will feel what she is trying to convey, the well-travelled Bostonian who is resident in California, said she is also “really into the [Irish] people and land. It’s not just a beauty location, the people have been and are very polite and gentle.”

Having embarked upon her full-time artistic career 33 years ago, Ms. Gaffney Wolf- son commented: “it gave me a means by which to express myself”, adding that it also helped her to relax. The hallmark of a true artist, Maureen admitted that when she started to paint she “didn’t care if people didn’t like it or if they thought it wasn’t good.” However, her innate drive and belief in her own artistic vision was to be rewarded when in 1983 the International Beaux Arts awarded her the accolade as ‘Woman Artist of the Year’.

A prolific artist, Maureen paints seven days a week employing the renaissance glazing technique when using oil. She said that the finished painting evolves from an elaborate structure of super-imposed layers of colour and glaze which gives it a unique depth and luminosity.

From Boston and California to the rugged mountain peaks of Keadue, Maureen has trawled the Irish Diaspora covering many lost generations and reconstructed a fascinating theme which bridges many severed social, cultural and spiritual links.

* The exhibition, with over 14 paintings, by Maureen Gaffney Wolfson will open on August 2nd, at 4.30 p.m. in Keadue Hall and will run for the festival’s duration.