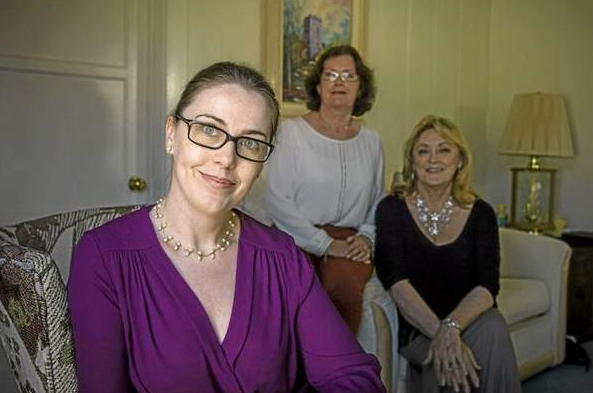 Pearl Crosby-Dillion, left, with her mother. Pauline Crosby, center, and painter Maureen Gaffney Wolfson. Crosby-Dillion and her mother came from Ireland to Los Angeles for a successful brain tumor surgery.


The nightmare is finally over. Saturday she leaves Los Angeles to fly home to Ireland a different woman. A mom her two young children have never really known. Healthy and full of life. Gone is the mom who would collapse in bed after coming home from work suffering from debilitating headaches so severe she couldn’t even cry about it anymore. Her children and husband couldn’t help her. Nobody in Ireland could. The only person who could do that was living 4,000 miles away. And that’s where the Irish mom and the Los Angeles surgeon would finally meet this month. In L.A., on the corner of fate and faith.

For more than six years, 37-year-old Pearl Crosby-Dillon was told by doctors in Ireland only one thing would help her with the constant migraines, the blurred vision and overwhelming fatigue she was suffering. Drugs. But the prescription medications didn’t work. Things only got worse. Finally, after an MRI this year, she was diagnosed with a non-life threatening pineal cyst in her brain, but the scan had been done without contrast. The doctors had missed the real problem. A deadly tumor 2-centimeters wide — the size of a postage stamp.

“That last day in the hospital the doctors told me all they could do was treat me with new medications and discharge me. I thought to myself, ‘I can’t carry on like this.’ I was already on nine medications and it was getting worse.

“I went downstairs to the meditation room to relax and try to focus. There was a Bible on the table. I opened it randomly to a page, and the first words I read hit me to my very core. ‘Listen to the words of the wise.’ ” But which wise? Not the doctors she had seen so far. They had completely misdiagnosed her. What did the words from Proverbs 22:17 mean for her?

“Was God trying to tell me to keep looking, don’t give up? I started shaking and crying, which I hadn’t done in years. I had been so worn down, so drained of emotion I couldn’t even cry anymore. That night I began to Google every expert worldwide who dealt with my symptoms.”

She found Dr. Hrayr Shahinian, who was having success performing a minimally invasive endoscopy surgery to remove tumors. But he practiced in Los Angeles 4,000 miles away. Her family was already deeply in debt with medical bills, they couldn’t afford anymore. She wasn’t counting on fate stepping in to meet faith.

Pearl’s father, Tom Crosby, told his daughter he loved her very much when she called that night with the MRI results. He wanted to be alone with his thoughts, but he had guests from the United States waiting for him in a restaurant. This was to be a big night for the mayor of Roscommon County in Ireland. Crosby was hosting a delegation from its new sister city, Downey, which was presenting him with a beautiful portrait of locally born Irishman John GatelyDowney, who founded the southeast Los Angeles County city named after him 150 years ago.

“Is something wrong?” asked artist Maureen Gaffney Wolfson, who had painted the portrait and was sitting at the table with her husband, attorney Steven Wolfson.

“Tom looked very despondent and unhappy,” she said. “That’s when he told us about his daughter’s condition, and what she had read in the Bible. She said she had gone on the Internet and found a surgeon in Los Angeles.” Steven Wolfson asked Crosby for the doctor’s name. The Calabasas attorney had undergone triple bypass surgery a few months earlier, maybe his cardiologist knew him. Wolfson gave his heart doctor a call on his private line.

Two hours later, Pearl received an email from Dr. Shahinian. He wanted to see all her medical records and the MRI.

“I was suspicious that it wasn’t a cyst, but rather a tumor,” Dr. Shahinian said. “But before having her fly all the way here, we talked on Skype, and what she told me confirmed my suspicions.” A week later, Pearl stood at the departure gate in Dublin Airport kissing her 9-year-old daughter, Katie, and her 6-year-old son, Tommy, goodbye. Then she got on a plane with her husband, Niall, and her mother and father, Pauline and Tom Crosby, and flew to Los Angeles.

“It was an emotional meeting with them,” Dr. Shahinian said. “You could see all the frustration they had been through, but now they were finally seeing some light at the end of the tunnel.” Pearl was still groggy after the successful surgery Oct. 8 to remove the tumor. She couldn’t speak when her mother handed her the phone, but she could hear every word her children were saying.

So on Saturday she leaves L.A. for Dublin a different woman. Ready to show her kids their new mom — healthy and happy. The old Mom with the tumor is gone. The family will be back for Christmas, guests again of the Catholic Society Devoted to the Sacred Heart in Chatsworth. And New Year’s Day, Pearl will be riding on the Downey Rose Float Association’s entry in the Rose Parade.

Going right by the Pasadena house where the man she came 4,000 miles to see once lived along the parade route. At the corner of fate and faith.