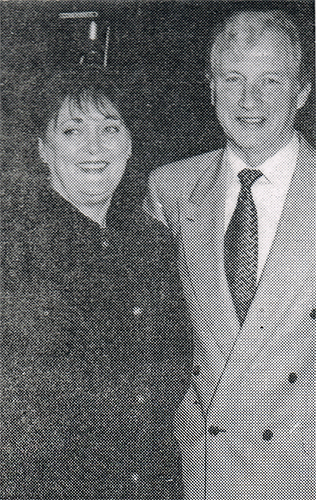 This year, for the first time ever, the Keadue Harp Festival programme includes an art exhibition, which features the renowned harpist Turlough O’Carolan as the centre-piece. Entitled “Coming Home”, the show is the culmination of a search for her roots by Hollywood actress and renowned Irish-American artist, Maureen Gaffney Wolfson.

The artist who claims to have found her spiritual home in Co Roscommon has lived the sort of life which would have intrigued the subject of her painting. Maureen has worked with some of most famous names in Hollywood including Danny Kaye and Racquet Welch in her 16 years as an actress. model, singer, dancer and entertainer. She took up painting 33 years ago us a way of “drowning my sorrows by pouring all my emotions onto canvas”. Those “sorrows” , she admits were the makings of a book in themselves but the emotions, moods and feelings in her work earned her an award as Woman Artist of the Year 1983 by the International Beaux Arts.

Ireland, horses and people are now the subjects of her painting. She works using a special technique called Renaissance glazing. Feeling there was an emptiness or loss in her life, she embarked on the discovery of her Irish roots in 1983, a search, which lead her by the most circuitous of routes to the door of Monsignor Travers in Roscommon. She and her husband Steve had been advised to contact Terry Leyden while in Roscommon. He, with his wife Mary, brought them to Keadue and the location of the old Gaffney homestead.

Deeply spiritual, with a special devotion to the Sacred Heart, Maureen immediately felt at home in Roscommon. She has decided to donate her portrait of O ’Carolan in aid of the O ’Carolan Museum fund and hopes to buy a home in the county, where she will spend part of the year. Maureen is hoping to display some of her paintings in Gleeson’s Restaurant, Roscommon in the coming weeks and in the Old Courthouse Art Gallery in Frenchpark in November and December.