Publication: The Downey Patriot
By Henry Veneracion
Published on April 25, 2013 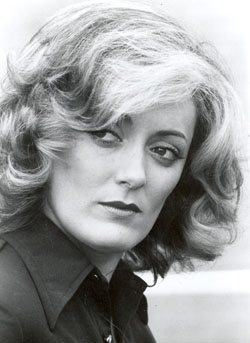 DOWNEY – The upcoming trip by a delegation from Downey to Roscommon County, Ireland – the birthplace of John Gately Downey, after whom the city is named – has unearthed unexpected links sure to add color and an exciting new dimension to Downey’s history.

One such link is Maureen Gaffney-Wolfson, former model, singer, dancer, actress, a performer for the Milton Berle and a regular on the Red Skelton TV shows, who landed movie roles which featured Raquel Welch (“Swinging Summer”), Carol Lindley (“Harlow”), and Sid Caesar and Wally Cox (“Guide for a Married Man,” directed by Gene Kelly). From time to time, in between movies, she made appearances on the “Perry Mason”(Raymond Burr) and Danny Kaye shows. But always she found refuge in painting.

On Saturday at the Columbia Space Center, Maureen spoke and sang (“You Belong to My Heart,” in both English and Spanish) at the fundraiser sponsored by the Downey Sister Cities Association in connection with its scheduled trip to Roscommon, where on May 24 the county will host “The Gathering” of all of Roscommon’s sister cities from all over.

Formally becoming a member of the association at the Saturday event and a confirmed member of the entourage to Ireland, Maureen is rushing two portraits of John Downey, one to present to the mayor of Roscommon, and the other to the city of Downey afterwards.

On a trip to Ireland, their second, in 1993 with her lawyer husband, Stephen, she was finally able to track down her ancestral roots in Keadue, also located in the county of Roscommon. On that fateful trip, they were actually able to locate the original Gaffney homestead, which she says was “remarkably still standing.” Maureen says she and Stephen were “overwhelmed with emotion at the sight of the old homestead,” adding it was “one of the most moving experiences” of their lives. Their first trip a decade before yielded negative results.Maureen took up painting primarily as “a means to express myself” and to relax. A private art tutor in Los Angeles, Flovia, taught her how to paint in oil using the renaissance technique of glazing, which involves “repeated applications of oil paints and a transparent ‘glaze’-a medium consisting of varnish, turpentine and linseed oil over another color or ‘ground'”.She also later studied under David Laffell and Thomas Fogarty (known for having influenced the work of Norman Rockwell) at the Art Students League in New York, and was recognized as Woman Artist of the Year in 1983 by the International Beaux Arts, Inc., a non-profit organization “dedicated to strengthening the bonds of world peace and friendship by encouraging international creative activities.”

While in New York, her paintings were exhibited at the Bronx Museum, the Centre Art Gallery and at UNICEF. She had exhibits done at the Kennedy Center in Washington, D.C. as well.She has travelled the world, and has seen her many paintings exhibited in Dublin and Belfast, in addition to her exhibits in various other galleries here in the U. S., on both east and west coasts, especially here in California where she once had a gallery in Palm Springs. In 1998, she was invited to exhibit her art at the International O’Carolan Harp and Music Festival held in Roscommon. She was said to be the first oil painter ever to exhibit at the international festival.

Her latest showroom, which opened only last year, is located in Calabasas. She and her husband today reside in Chatsworth. She was born in Massachusetts.All told, Maureen says she has been painting for 42 years. The last four years, though, have been spent mostly in writing her autobiography. The book is finished now: it’s 299 pages long and is with her editor, she says, and the next step is to find a publisher. She has titled it “Born with a Broken Heart, Why?”: the book is the story of her “poverty, heartbreak, and a long bitter struggle for recognition, even fame.”

Included in the book are photographs of her paintings over the years, family photos as well as photos of people that “have figured in my life.”She has said, “I only paint where I’ve been.” By this measure, she’s been able to paint innumerable scenes, not to mention landscapes, portraits of people and paintings of horses. Among the most memorable places she has caught in oil are the “the magical grounds” of the Barnsley Gardens just outside Georgia, and of course her ancestral hometown of Keadue.Of the Irish countryside in her fruitful visit to Roscommon, she exclaimed, “It’s a painter’s paradise. Everywhere you turn, there’s so much to paint!” The Keadue visit alone generated more than 70 paintings (of the homestead, the surrounding countryside, the bogs, horses, castles, the Roscommon Racecourse, and the Blarney Castle, of course.)She says her paintings have been collected by such personalities/personages as Bill Clinton, Frank Sinatra, Lilly Palmer, the comedian Henny Youngman, Barbara Stanwyck, Lisa Minnelli, and Ireland’s former presidents Mary Robinson and Mary McAleese.