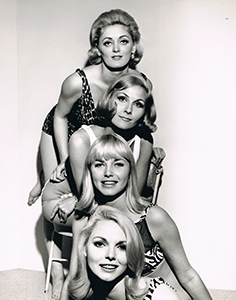 IT WAS A DAY for the girl-watchers at Lits. Four shapely platinum blondes from the Bill Sargent film “Harlow” put on a fashion and bathing suit display. Some of the gentlemen caught every show. Three of the girls—Janet Dey, Jackie Andre and Bobbie Whitby – appear briefly in the Clover Club gambling room sequence in the picture. Photographic model as well as actresses, they were signed for both the movie and the subsequent promotional tour of 15 cities, which has a tie in with the Cole bathing suit people. Miss Dey drew close and well-merited inspection with a black swimsuit job called “Showdown.” Fourth member of the group is TV actress Maureen Gaffney (a Red Skelton show regular) who has a part in the picture. “I play the call girl who is the intimate friend of Effrem Zimbalist, cast as Miss Harlow’s husband. I also have the song number, ‘Love, Oh Love, Careless Love’ and do a skit in the credits.”

The girls all refer to the picture as “Bill Sargent’s ‘Harlow’” to distinguish it from the Joseph Levine production of the same name due out later with Carroll Baker starring. Carol Lynley has the title role in the Sargent version, which was filmed in Electronovision, a process in which master shots and closeups are lensed at the same time. The Sargent “Harlow” is lined up for nationwide showings in 838 spots May 12, with 35 houses in this area signed so far.