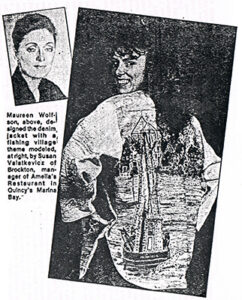 A fantasy fishing village resembling a pastoral Provincetown is painted across the front and back of the denim jacket The beautiful art work is enhanced with an overlayer of glittery paints and is studded with crystals.
“The last step of the painting is highlighting with glittery paints,” said Maureen Gaffney Wolfson, an artist and fashion designer whose one-of-a-kind jackets are making a major stir in Provincetown on Cape Cod. “I layer the paints to get depth, and then put on the crystals — Austrian crystals, the best that money can buy.

“I shade with my crystals; I paint with them, said Wolfson, whose jackets, as well as some by other artists, are sold in a new Provincetown boutique and gallery called “Le Pauvre Homme’ (The Poor Man, in French.)
“The name is a spoof,’* Wolfson said. She and her ^”lawyer and photographer husband, Stephen, who is president of Le Pauvre Homme, chose the tongue-in- cheek name because their magnificent jackets are hardly for the poor. Prices range from $350 to $4,000; “depending on the art work and the crystal,” the designer said.

Wolfson, who had been an actress, model and singer before concentrating on painting, was named “Woman Artist of the Year, 1983” by the International Beaux Arts at the annual Beaux Arts Ball in New York. Among the people who own her paintings are Sid Caesar, Henny Youngman and Lilli Palmer.

Although the red-haired Wolfson, a former Bostonian, continues to paint on canvas, she is now also painting on denim, with the jackets her new art medium. “If you get tired of wearing the jacket,” she joked, “you can always hang it on the wall.”
It seems inconceivable that even the most jaded clotheshorse with more money than sense could tire of one of these jackets, which are truly works of art. Take the one with the fishing village as an example.

It could well be P-town — without all the people. On the front of the jacket, the landmark monument stands guard over the charming vil-lage, while on the back, a church and a fishing boat down below on the water dominate the scene. On both sides, beyond the village built on pilings, is the harbor with sailboats on the sparkling blue sea, their masts outlined in crystals. Gulls studded with clear and gold crystals glitter above the water.

One sleeve has a lighthouse on it; the other, six lobsters with red crys-tals, bordering the words, “Le Pauvre Homme.” (All the jackets have the, name of the business on their right sleeve.).
“The jackets are all in denim and are all pre-washed,” Wolfson said. “I do the drawing on paper, then stencil it onto the fabric and paint it with fabric paints. Then we do the crystal work. It’s all done in pieces — the front, the back and the sleeves —- and then we sew them together; that’s the last step.”

The jackets have several themes — ‘I make up a scene: landscapes, particularly the Cape, or New Mexi-co, parrots or clowns,” the designer said.
One of her favorites is a Japanese theme, “a tribute to my niece, Mau-reen Gaffney of Weymouth, who is half Japanese, half Irish. Maureen is six years old “and beautiful,” her aunt said.
Instead of the usual “Le Pauvre Homme” on the sleeve, the Japa- nese-motif jackets have “the poor man” in Japanese, written in Japa-nese script.
“Visitors from Japan love it,” Wolfson said. But although they’ve tried on the various jackets in the Provincetown boutique, they haven’t bought any as yet. “The first jacket that we’ve sold was in the Japanese theme,” she said. It was bought by an American couple — for $2,100.

Sometimes the jackets are the collaborative efforts of several art¬ists. The P-town jacket, for instance, was painted by Tom Tanza, a Cali¬fornia artist — “he did the painting, and I beaded the jacket and sewed it,” Wolfson said. The jackets are manufactured in California, where the Wolfsons make their home when they’re not living and working on the tip of the Cape. “In the beginning, I did everything,” Maureen Wolfson said. “Now we have six beaders and three seamstresses in California. The beading is a lot of work; it takes longer to do the beading than to paint the jacket.”

Her husband beaded one of their most beautiful jackets, with a South-western scene. “It has a pueblo in; Taos, N.M., Indian women, pottery and cactus, and Indian symbolism,” said Maureen Wolfson, who did the painting. “I only paint where I’ve been,” Wolfson said. “Pm doing a jacket with the Boston Common for Le Collage, the boutique at the Sheraton Boston.” Le Pauvre Homme does a wholesale, as well as a retail business, especially on the West Coast. Recently, Wolfson was commissioned to paint a fresco at the Friendship Baptist Church in Pasa-dena, Calif., “a black church, which is a National Historic Landmark,” Stephen Wolfson said. “The church will be 100 years old next year.”

“I’ve sung there,” said Maureen Wolfson. “I’ve always wanted to paint a ceiling; I’ve wanted to do a Michelangelo number. So we went to Italy and spent three weeks in Rome. I’m really thrilled to be doing this.” Wolfson said she has “always painted,” but at first only as re- creation. After modeling swimsuits for Cole of California, she got her first television break in 1963 on “The Red Skelton Show.” She became a regular on the show for the next few seasons and also made guest appear-ances on “The Tonight Show,” “Per¬ry Mason,” “The Danny Kaye Show” and a “Thin Man Special.”

She appeared in several movies, among them A Swinging Summer with Raquel Welch, Harlow with Carol Lynley and Efrem Zimbalist Jr., and Guide for a Married Man with Wally Cox and Sid Caesar. “I lived in New York for seven years,” she said. “I always painted while singing, modeling and acting, and I became much more interested in painting. I couldn’t stand the rejection — that’s show biz. I was a starlet 16 years, and that was a long time to be a starlet. I enjoy my world now, and I’m free.” It may have been prophetic that while singing in cabarets in New York, Wolfson made all her own gowns.

She studied painting at the Arts Students League in New York and with noted artists on both coasts. In 1984, she left New York for Palm Springs, Calif., where she opened a gallery. There, she sold her own paintings as well as those of other artists and did custom framing. She met her husband, a Californian, at the gallery when he went there to exhibit some of his photographs.
Today the Wolfsons live in Los Angeles and P’town. Their boutique and gallery will be open through the end of October and then possibly on weekends in November.

“We both fell in love with the Cape,” said the former Bay Stater. “And I felt at home again.”