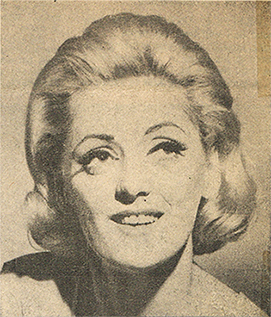 Publication: The Sunday Bulletin
By Frank Brookhouser
Publication Date: May 2, 1965

MAUREEN GAFFNEY was raised right around the corner from Harvard University, a seat of learning, worked in a pantie factory in Tucson, Ariz. and wound up making movies in Hollywood at 21.
Within the short space of 11 months, the film starlet with the promising future already has made two pictures, is slated for two more, and has appeared on Red Skelton’s television show ten times, as well as doing a takeoff on “Goldfinger” with Johnny Carson on his Tonight outing.
The girl from Cambridge, Mass., has pert and saucy features, a frame for viewing, hazel eyes, blonde hair (“with black roots,” she says) and a quick, easy and hearty laugh.
She was brightening our town with both the view and the laughter the other day as she came here with several accomplices in prettiness on an advance promotional tour for “Harlow,” the picture in which she will make her screen debut.
This “Harlow,” which will be coming our way in the early summertime, is the Bill Sargent version, starring Carol Lynley, Efrem Zimbalist, Jr., Ginger Rogers and Barry Sullivan.
“I play a very close, professional friend of Efrem,” Miss Gaffney told me. “He runs a gambling joint,” she added.
“I also sing a little song in the picture—‘Love, Love, Oh Careless Love.’ Not in a professional way, but baby-voiced and nasal.”
ACTUALLY, this was the second movie made the merry Miss Gaffney.
“The first one,” she said, was ‘A Swinging Sum-mer.’ It will probably be out this summer. It should be. It was made last summer. It’s a rock ’n’ roller, like one of those beach things. Jim Stacey’s in it. And Gary Lewis and the Playboys. And me. And some others.” Film-wise, things will be looking up considerably for the blonde newcomer when she completes this national tour and returns to Hollywood.
“As soon as I get back, I’m going to make one opposite Elvis Presley,” she explained. “There is a title, but I can’t remember it. Isn’t that awful? I was told, but I’ve forgotten.”
After that one, she will go to work in “Fatty Arbuckle,” the screen biography of the famous silent screen comedian, which will also be a Bill Sargent production.
It was Sargent who saw her in action—not making panties but dancing—and paved the way for her appearance in his “Harlow.”
She had left Cambridge and moved to Tucson seven years ago, she explained. “And I worked in that pantie factory, making ladies’ panties and lingerie, for two and a half years.
“Then I moved to Hollywood. I had studied bal-let for seven years and singing for two years when I was in Cambridge. But a show business career was the farthest thing from my mind. I just work at something different.”
SOMETHING different turned out to be a jazz dance at the Crescendo nightclub in Hollywood.
“An exotic type dance?” she was asked.
“No, I’d rather say jazz because you say exotic and it sounds cheap. It was interpretive dancing. I did one number to a slow bluesy rhythm and I did the Jerk, which was a popular dance then. They change every day now.”
“I loved to work, dancing, but I didn’t like the club atmosphere. Bill Sargent started to come in, though, and we got to talking to each other, and he knew I wanted to get out of the place. He was very nice. And he got the ‘Harlow’ job for me.
Miss Gaffney is not now, never has been, and does not plan to be, married – at least in the immediate future.
“I know everybody says it, but my career does come first. So work’s the main thing, with a little tennis and sun-tanning for fun.
“And I do want to do drama some day. But I know I’m not really ready for anything like ‘Hamlet’ or ‘Cleopatra.’ Most of my roles, the ones I’ve had, have been sexpots. They seem to think I’m the sexpot type.

“That’s what I’ve been playing – except when I get on the Red Skelton show. It’s a family show. They can’t afford to take a chance.”