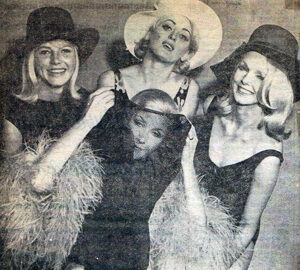 These four young Hollywood starlets visited Denver Tuesday and although there was no re­corded earthquake, things cer­tainly were aquiver for a time. Through the eyes of a fellow who was sitting closest to the newsroom door and who is al­ways anxious to meet new people, let me tell you about it.

THE GIRLS ALL were wear­ing blue high-heeled shoes. And they all were wearing blue coats which kept falling open to re­veal pretty bathing suits. On each coat was a clearly lettered name tag. Maureen—or was it Janet?— had on a large white hat. The others wore large blue hats. Or was it three large white hats and one blue one? Let’s start again.

All of the girls were wearing large brightly colored hats of Jean Harlow vintage to publi­cize Bill Sargent’s “Harlow,’’ an electronovision movie set for re­lease in 800 theaters on May 12. It will be shown here at the Denver Theater. But in addition to drawing at­tention to the film, they also ap­peared in two Neusteters fash­ion. shows, modeling the cele­brated “scandal” swim suits as well as costumes of the Harlow I era. “THESE SWIM suits are com­fortable,” said Bobbie. “They’re even better than a bikini,” explained one of the others, “because they don’t move unless you move.”

Somehow I felt it was my move. “Wasn’t Jean Harlow considered the brightest star in the golden age of movies?” They agreed that this was so. “Now, about those bathing sv.it’-. Porj’t yen -find it a little chilly walking around with so little protection from the ele­ments?”

“In fact, it’s been almost too warm,” offered Janet in a fit of logic which at the moment es­capes a person. (Denver is the fifth stop in a 15-city whirlwind itinerary. The first four cities must have had abnormally high temperatures.)

SOMEONE SNEEZED. Aha! We looked accusingly at each girl in turn. Maureen yawned. Janet said she thought she had an aunt and uncle living somewhere in Colo­rado. Janet said it was her birthday, yep, 19 years old yes­terday. The other girls had bought her a cupcake with a candle on it.

Those coats certainly need more buttons. A girl could catch a terrible cold. “Did you get any other presents?”

“Yes, I got a lapel watch.” Apparently she’s going tu “W car | it on a chain around her neck.

THE YOUNG STARLETS all have ambitions to be “name” actresses, but said they realize j beginners must be content with bit parts, modeling and the rigors of a publicity campaign while studying such things as dancing, diction and voice.

“Oh, yes. Do you sing?” No. Some. A little. No. The schedule allows little time for relaxation or paying much attention to the men who gather and look, and look, and look. “There are too many of us for someone to buy drinks and there always is safety in num­bers,” said Maureen.

Or was it the chaperone who said that?