Publication: The Downey Patriot
By Eric Pierce
Published May 23, 2013 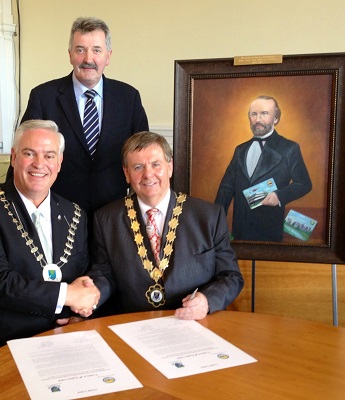 John Gately Downey was born in Roscommon and immigrated to the U.S. in 1841. Twenty years later, he became California’s seventh governor. Guerra said he plans to visit the ruins of Downey’s childhood home tomorrow.

In the photo above, Guerra is wearing a 200-year-old pure silver “Great Mayors Chain” that has every Roscommon County mayor’s name listed on each link.