THE SIGNING of a twinning agreement between County Roscommon and Downey city in Los Angeles, California has raised high hopes that both signatories will benefit through tourism, business, and cultural connections in the future. The US flag was flying proudly outside council buildings last Thursday morning as a warm ‘Cead Mile Failte’ was rolled out for a number of special visitors from California. The Californian delegation, which included Mayor of Downey City, Mario Guerra, was visiting the county to formalise a new sister city twinning agreement between Downey city and County Roscommon.

The twinning agreement Stems from the strong historical links between County Roscommon and i he City of Downey, which was named after John Gately Downey, a native of Castlesajnpson, Taughmaconnell, who founded the city in the mid-1800s. The County Roscommon man left Ireland for the US at the tender age of 14 and went on to excel in the business and political world. In addition to making a significant contribution to the development of Downey city, he also became the first foreign-born Governor of California in 1860. Today the City of Downey is best known as the birthplace of the Apollo space programme and has a population of more than 100,000.

Last Thursday I lie council laid on a big Roscommon welcome for the Californian visitors, who were also visiting as part of The Gathering celebrations and were spending a number of days touring and sightseeing in the county. The auspicious occasion was also attended by members of Taughmaconnell Heritage and Historical Society and local area councilors amongst others. Mayor of Roscommon CDr Tom Crosby and Mayor of Downey City Mario Guerra bot h spoke of the wonderful legacy left behind by Governor Downey and of the huge benefits to be gained through the twinning agreement. Mayor Cllr Crosby said that the new relationship being forged with the Californian city presented opportunities for trade, tourism, and even student exchanges in the future.

“Roscommon County Council is responsible for the social, cultural and economic development of the county and for this reason the council is delighted to promote the sister city process as it provides a great opportunities for business exchanges etc,” the mayor said. Mayor Guerra reciprocated by welcoming the agreement as an opportunity to build oil the already strong connections with County Roscommon and Ireland. He said that Governor Downey had left a wonderful legacy in Downey having contributed so much to the development of the city and American life.

The Castlesampson native had many achievements, including the establishment of the first pharmacy in the state of California while also founding the chamber of commerce and historical society and other businesses, such as a merchant hank and oil company in Downey. “One of the things that I’m so proud of talking about is Governor Downey. And now seeing where he came from and seeing the kind of person that he was explains it to me because I’ve been impressed beyond even what I was already expecting, not only by the country and people but also from what I’ve seen here,” Mayor Guerra said, adding that the citizens of Downey were proud of their roots.

The Downey City Mayor added that the twinning agreement represented an important and historic occasion that would pave the way for a “bright future” for hot h signatories. County Manager Frank Dawson said it was a “truly wonderful and historic occasion” and that he had no doubt that Governor Downey would be looking down with great pride on his native county and his adopted homeland that he had contributed so much to. Mr. Dawson added that the occasion also offered an opportunity to celebrate the tourism and industrial links between Ireland and the US, as he noted the 2,000 people employed in US-based companies in the county. He added that I he collaboration between the council and Taughmaconnell Historical Society was testament to the positive partnership that could be forged between elected and community representatives.

Local area councilors Ollie Moore, Jimmy Kenny, Tony Ward and John Keogh were among a number of councillors to welcome the twinning agreement as a wonderful opportunity to forge a long and fruitful relationship between County Roscommon and Downey City. While Downey city is ‘sistcred’ with five other cities or towns around the world, it is the only city in die state of California to be ‘sistered’ with one in Ireland. A number of presentations were made following the signing of the twinning agreement, most notably a portrait of Governor Downey which was presented to the council.

The artist behind the painting, Maureen Gaffney Wolfson, who has roots in Keadue, said that the “fusion” painting incorporated elements, old and new, and of Downey and County Roscommon. The council presented a woven tapestry on the theme of ‘40 Shades of Green’ created by local artist Francis Crowe to the Californian delegation. 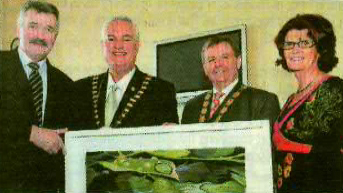 (left)Mayor of Roscommon, Tom Crosby and Frank Dawson, Roscommon County Manager make a presentation of some fibre art called “Rain Drops” to Mayor of the City of Downey, Mario A. Guerra created by rtist Frances Crowe. 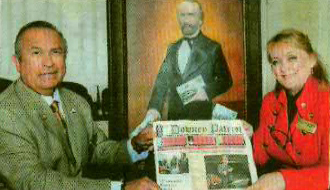