He’s 80 now, with a lifetime of experiences that includes escaping the Holocaust, fathering two sons and traveling the world for his jewelry business. But one of Ernie Goldberger’s most vivid and enduring memories is the day nearly 60 years ago that the state of Israel was created, a landmark event in his life and the lives of the world’s Jews. “There was dancing, crying. You couldn’t get the people out of the streets,” he said of the scene in Tel Aviv on May14, 1948. “Rich, poor — everyone got together. It was a dream of 2,000 years realized.” Goldberger was just a young man at the time, living in the Mideast after fleeing Eastern Europe and escaping the Holocaust that killed his parents, three brothers and 6million other Jews. He joined a special forces unit of the Haganah, a precursor of the Israeli Defense Forces.

“You had to do what you had to do to survive and create something so it should never happen again,” said Goldberger, who now lives in Beverly Hills. “We went with the idea of building Israel.” That Israel has existed for 60 years is a miracle, said Rabbi Marvin Hier, founder and dean of the Simon Wiesenthal Center and the Museum of Tolerance in Los Angeles. “After 1945, every Jew went into depression,” Hier said, referring to the revelations of Adolf Hitler’s “Final Solution.”

“Israel cured us of our depression, like a collective antidepressant,” he said. “Israel showed that Jewish history will go on.” Shortly after its creation, Israel was attacked by forces from Egypt, Syria, Jordan, Lebanon and Iraq, launching the yearlong Arab-Israeli War. It was the the start of decades of political conflict and violence — turmoil that continues today. Still, the country has managed to become a leader in such areas as technology and culture, said John Fishel, president of the Jewish Federation of Greater Los Angeles. “Even with the constant conflict, life goes on,” Fishel said. “That is one of the really remarkable things about Israel — the vibrancy of Israel at a time when it is under duress, even in periods when there has been consistent terrorism.”

Although Israel may be far from Los Angeles in terms of miles, many local Jews carry the country close to their hearts. “People care deeply,” Fishel said. “In the summer of 2006 when the last war occurred and the missiles were being lobbed into northern Israel, people mobilized.” Mobilizing for Israel is something Jews in Los Angeles have been doing for decades. As a child in the mid-1940s, former Congressman Mel Levine remembers racing to the door of his Hancock Park home and being knocked over by a gunny sack filled with weapons meant for Israel and its war of independence. His father, Los Angeles-born Sid Levine, was the Western states representative for the Haganah. “My dad never talked about it,” Levine said. “When pressed, he clearly acknowledged he was part of this group of people that was helping the Israelis.”

During his first trip to Israel as an adult in 1972, Levine — then a foreign policy legislative assistant to U.S. Sen. John V. Tunney — felt the true impact of his father’s actions. “Someone figured out I was my father’s son, and he threw his arms around me,” Levine said. “He basically said, ‘Without your father and people like him, our struggle would have been much more difficult.”‘

Levine’s goal was clear. “During my adult lifetime, nothing has been more important to me than doing everything I can to work for Israel’s survival and security,” said Levine, now an attorney at Gibson, Dunn & Crutcher. “I obviously on one level inherited it from my parents.” When he began serving in the House of Representatives in 1983, he said he headed straight for the subcommittee on the Middle East. “I believe that Israel’s survival and security are essential,” Levine said. “It will require eternal vigilance. Israel still has bitter enemies in the region.”

Sol Teichman of Encino recognizes the uncertainty of Israel’s future and its prospects for peace with the Palestinians. But it’s what motivates him to travel the world, speaking about his experiences during the Holocaust. “If they destroy Israel, the rest of the world comes next,” said Teichman, a longtime member of the board of the Wiesenthal Center.

Teichman traveled last year to Indonesia, a predominently Muslim country, where he spoke at an interfaith conference about losing dozens of relatives in concentration camps and the two-week “Death March” to Dachau. His goal is to spread understanding among the world’s cultures and religions.

“Unless we have tolerance, nothing is going to happen,” he said. Teichman also has helped to build and support schools, community centers and social service programs in Israel and other parts of the world. “I always look forward to going back to Israel,” Teichman said. “I feel like I am getting home every time.” With help from individuals such as Teichman, Jewish leaders say, there is no question Israel will survive and thrive. “All of us who live in other parts of the world, we are able to live fuller lives as Jews because of the fact that there is a modern state of Israel,” said Fishel, of the Jewish Federation. “It’s a source of inspiration and a source of hope.”

Chatsworth artist Maureen Gaffney-Wolfson painted “The Land and the Spirit” to celebrate the 60th anniversary of the founding of modern Israel. 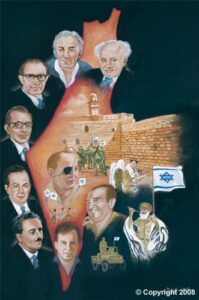 The images of nine heroes of Israel form the numeral six, while a zero is represented by the kite-flying children, soldier Joshua Matza praying and other soldiers dancing at the Western Wall.

To read more about the painting, go to www.dailynews.com.