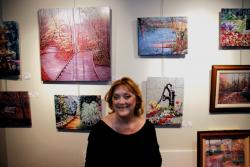 SPECIAL TALENT- Artist Maureen Gaffney-Wolfson poses by some of her work Wednesday at the Simi Valley Cultural Arts Center. Gaffney-Wolfson has been painting for more than 40 years and currently has around 30 pieces on display at the center. Irish landscapes are among the themes artist Maureen GaffneyWolfson enjoys capturing in oils. She’s traveled to Ireland many times to paint the land of her ancestry.

“I went back and found my great-grandparents’ homestead, which I painted,” GaffneyWolfson, 65, said. “Ireland is a painter’s paradise; whichever way you turn, there’s something to paint.” Celestial scenes, whimsical animals and lush gardens are the artist’s favorite subjects. Her colorful paintings tend to add a touch of fantasy even in a realistic setting. Twentyfour of GaffneyWolfson’s paintings are on display at the Simi Valley Cultural Arts Center now through the end of July. They are reproductions on canvas of her original works, and the artist has enhanced each one with acrylic paint for a personal touch.

They are priced from $75 to $2,400, depending on size. “Maureen is very creative. I like the details on the landscapes,” said Jack Scroggins, a member of the board at the cultural center. “If you look at a garden scene, it’s like you are walking in the garden.” Five years ago Scroggins encountered the artist’s work through a game of chance. He bought a dollar ticket at a church raffle in Chatsworth, where GaffneyWolfson lives, and won the prize: a $6,000 painting by the artist titled “Sacred Heart.”

Ultimately, the piece of art proved too large for Scroggins’ home. He thought the painting should be displayed in a church and donated it to Our Savior Lutheran Church in Simi Valley. Gaffney-Wolfson grew up in the tenement slums of Worchester, Mass. “I was always very creative as a child. At age 4 or 5, I took broken plaster from the walls and used it to draw on the sidewalk,” she said. She dropped out of school in the eighth grade to care for her five siblings while her mother, a single parent and a nurse, worked the night shift.

At the age of 60, the artist, having gotten back on track with her formal education, graduated on the dean’s list from Pierce College in Woodland Hills. Gaffney-Wolfson moved to Los Angeles in the early ’60s and found work as a print and showroom model. In 1964, she landed a recurring role on “The Red Skelton Show.” “There were a few of us that were pretty steady there and did character roles,” she said. “Every week we played something different. I could be a nurse or a mermaid, depending on the role.” The gig lasted for four memorable years, ending in 1968. “‘Red’ was like a party. It was like going to a party every day,” Gaffney-Wolfson said. “I was too young to realize it wouldn’t last forever.”

In 1980, Gaffney-Wolfson moved to New York City to study at the Art Students League. After seven years in the Big Apple, she headed south to Palm Springs. There the artist had a gallery and custom framing business and met her future husband, Steve. The couple moved to Chatsworth, where they’ve lived for 22 years. An attorney with a practice in Calabasas, Steve helps his wife with the business side of art. Gaffney-Wolfson’s art has been shown at galleries as farreaching as the Bronx Museum of the Arts in New York, the Kennedy Center in Washington, D.C., and the University of Ulster in Ulster, Ireland. As an internationally known artist, Gaffney-Wolfson has come a long way since her days as little girl drawing on a sidewalk. “I wanted to be a fine artist, and I thought I wouldn’t make it until I was well into my 50s,” she said. “Well, I’m now 65. You’re always growing. You think you’re there and you’re not. You keep reaching farther. I don’t think there’s an end to it.”