Publication: The Downey Patriot
By Henry Veneracion
Published May 30, 2013 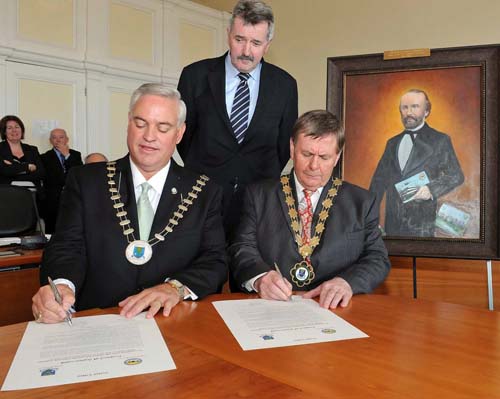 DOWNEY – Back from leading a 9-member delegation to the land of John Gately Downey’s birth in Castlesampson – located in the parish of Taughmaconnell, in South County Roscommon, and recognized as the geographical center of Ireland – and which was undertaken at the invitation of the Roscommon County Council, mayor Mario Guerra recalled several of the trip’s highlights and pointed to what the relationship augurs for the future.

The backdrop: the young John G. Downey left his bog-pocked surroundings at age 14 for America and before his death at 66 was responsible for such achievements as becoming the seventh governor of California in 1860 and giving his illustrious name to this city in 1873.

Aside from wishing to see where Downey lived, the weeklong trip’s purpose was to seal the relationship between the city of Downey and Roscommon County as sister cities.

The official delegation included Downey Sister Cities Association president Robert Rubio, Alda Sitchling, Maureen Gaffney-Wolfson (whose paintings of Gov. Downey have been gifted to both Roscommon County and Downey), along with their spouses.

Downey had earlier received a letter from the Roscommon County Council saying it was “anxious to forge links” between the two places. The trip was also timed to coincide with “The Return of the Rossies,” a special event welcoming delegations and visitors from overseas and locals alike to celebrate The Gathering. The formal signing of the sister cities agreement between Downey and Roscommon County was performed on May 24.

Guerra said they visited the ‘homestead’, the actual house the Downey founder was born in, roofless and in ruins, with only the cut stone walls left standing. Guerra said it is hard to get to and not accessible by car. It is said to be county property now and Guerra expressed interest in somehow obtaining the rights to the property for historical preservation purposes if this is possible.

“I was also able to give a speech at the opening night of the Return of the Rossies event at King House in Boyle, Roscommon County,” he went on. “There were approximately 500 people there and our city was well received. They were fascinated by the roots of our city being traced to their native son.”

“Their hospitality was amazing and they appreciated our efforts to be there,” Guerra said.
Among the several future opportunities Guerra said were discussed with Lord Mayor Crosby, besides solidifying the obvious historical bond linking the two cities, were student and government exchanges, mutual tourism, manufacturing and even agricultural products (Irish beef, lamb and sheep).

Looking ahead, Guerra said he intends to talk about his trip and its implications to different clubs in Downey.

“I consider it important for our community to know where our roots come from, and to continue to celebrate this kinship,” he said. “That’s why what really happened last week was very important. It was probably one of the highlights of my professional career.”

At the time Guerra granted this de-briefing Tuesday to this reporter, prior to the City Council meeting and really only hours after the delegation’s touchdown at the airport, he said more than once, “The jet lag thing is real. I’m so tired. My head is still spinning.”