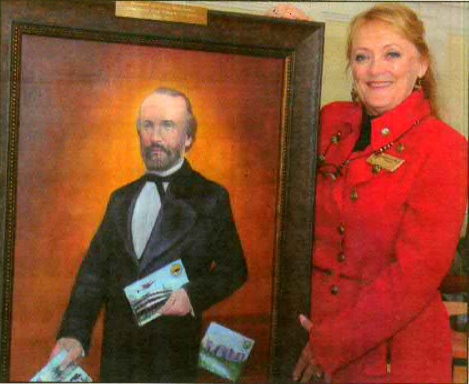 The signing of a twinning agreement between County Roscommon and Downey city in Los Angeles has been heralded as a wonderful success. A 10-person delegation from the Californian city, led by Mayor Mario Guerra, traveled to Roscommon recently to formalize links with the county. The delegation attended functions in the Roscommon County Council Chamber and King House, Boyle, to rubberstamp its ties with the county.

The twinning partnership arose due to the fact the city of Downey takes its name from Taughmaconnell native John Ciatley Downey, the youngest ever governor of California. He led south Roscommon in 1842, aged 14. Indeed, the Downey delegation presented the council with a portrait of Governor Downey, painted by Maureen Gallhey-Wolfson.

Maureen – a former model, dancer, actress, who regularly appears on television programs in the USA has Roscommon blood. On a trip to Ireland with her husband, Stephen, in 1993 she was finally able to track down her ancestral roots to Keadue. On that fateful trip, they were actually able to locate the original Gaffney homestead, which she says was “remarkably still standing.” Maureen became a member of the Downey Sister Cities Association last month and was a member of the entourage to Roscommon last week. Local Cllr. Orla Leyden said they thoroughly enjoyed their time here. “Great friendships were made during their in Roscommon and plans are already being made to maximize the potential of this sister city project for the people of Roscommon and Downey,” said the Fianna Fail member.

“I was fortunate to meet the group from Downey on a number of occasions during their visit, having known Maureen and Stephen for many years prior to this trip, “The group enjoyed their stay in County Roscommon, staying in the Abbey Hotel, Roscommon town. They were moved by their visit to the John Gately Downey homestead, near Taughmaconnell, and the warmth of the people. “They also enjoyed a tours of Roscommon Town, the beautiful Roscommon Castle, Loughnaneane Park, Roscommon Abbey and Castlecoote. “They also got time to pick up great gifts in Roscommon town to bring home and loved the Gathering events at Lough Key Forest Park, Kilronan Castle and all over the county.” 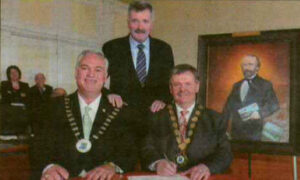