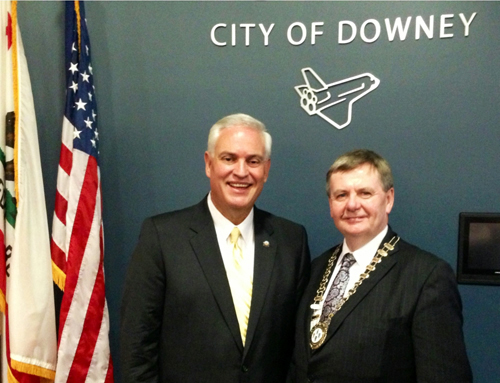 When contacted last Tuesday at her home in Dublin, Ireland, the 37-year old youngest daughter of former Roscommon County mayor Tom Crosby, Pearl Crosby-Dillon, who underwent a well-publicized, successful brain tumor surgery on Oct. 8 in Los Angeles, said, sounding like Maureen O’Hara in the part of an Irish colleen, “It’s unbelievable. I’m significantly improved. I’ve got no more headaches. Except for a feeling of weakness in my knee, I think I’m on the full road to recovery. The surgery solved all my problems.”

She’s otherwise on a regimen of rest. She added she’s definitely getting better.
Pearl, who works for a private hospital in Dublin, said the operation lasted some 4 1/2 hours.
Reviewing her ailments prior to her surgery, Pearl had suffered-for about seven years–from a constant round of migraines, blurred vision, and debilitating fatigue, and no one knew why.
Until a moment last May that, according to her dad, Tom, who is now serving as chair of the West of Ireland Regional Authority, had the touch of the divine.
It was at that time when a delegation from Downey led by mayor Mario Guerra was visiting Roscommon County to formally sign the twinning document that would join Downey and Roscommon County as Sister Cities. A break in the meeting would reveal that Tom Crosby’s daughter, Pearl, had just received bad news: she was diagnosed with a rare brain tumor.
Crosby was of course devastated, and looked it. Learning about her predicament, delegation participant attorney Steve Wolfson, husband of Maureen Gaffney Wolfson who painted the portraits of John Gately Downey (it was the historic connection between the two cities that occasioned the event) said he just had triple bypass surgery performed by his doctor, Cedars-Sinai Hospital’s Dr. Hrayr Shahinian, who had developed this minimally invasive procedure, and he just might be of help.
And sure enough, after reviewing Pearl’s medical records, her operation was scheduled. The successful surgery led Crosby to remark: “I’m not that much of a believer, but this confluence of events that led to my daughter’s deliverance couldn’t have happened merely by chance. A higher power must have been at work here.”
This is what Crosby further said when we reached him in Ireland on Tuesday (Wolfson arranged the 3-way phone conversation): “The surgeon said it should be a matter of a few weeks before she’s completely a new person. We’d like to thank the Sister Cities committee, especially Steve and Maureen, who made our visit to L.A. so memorable. We had made inquiries in both England and Ireland for a specialist for Pearl, to no avail. We’re so glad Pearl is on her way to full recovery, no more terrible headaches, no more problem with her eyesight. We’re feeling over the moon about this.”
Pearl said, “We look forward to spending the Christmas holidays with Steve and Maureen, with a nice assist from the Sisters of the Sacred Heart in Chatsworth. I’m looking forward as well to riding on the Downey Rose Float in the New Year’s Tournament of Roses Parade.”
Pearl will be traveling with husband, Niall, and their two children-daughter Kasey, 9, and 6-year old Tommy (“who are both in school”).
She said she hopes to be completely recovered by then.